Children of Obed and Catherine (Johnson) Alvord, all born in Colchester, Connecticut:[7]

Introduction to The Lost Trumbull

The Lost Trumbull: The Descendants of Joseph Trumble, Jr. (1705-1731) of Lebanon, Connecticut

Sarah Trumble, The Wife of Elijah Johnson of Colchester, Connecticut


Posted by The Lost Trumbull at 9:29 AM No comments: 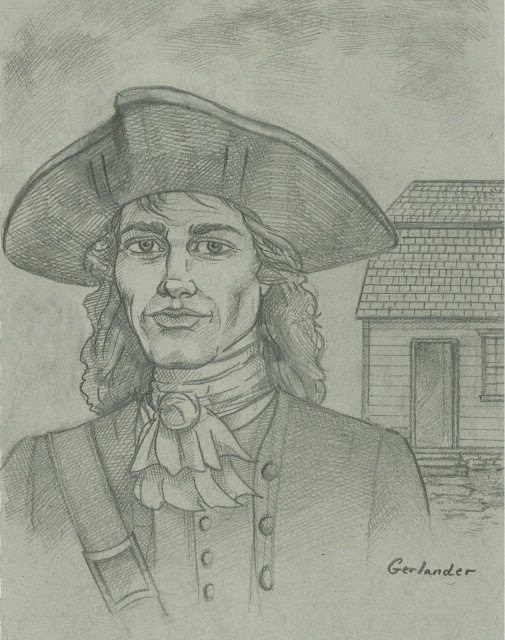 Pencil Sketch of Captain Joseph Trumble, Sr., Patriarch of the Trumble/Trumbull family of Lebanon, Connecticut (my ancestral grandfather), with the Trumbull family store in the background, later his son Jonathan's Revolutionary War Office. Joseph Trumble, Sr. moved to Lebanon, Connecticut in 1704, and according to tradition built this building in 1727.

"He was distinguished for high integrity and great enterprise as a merchant, active in all the local affairs of the church and the town, and for many years captain of the train-band. He was the father of Jonathan, the "war Governor," and was the founder of the Lebanon branch of the family."[1] 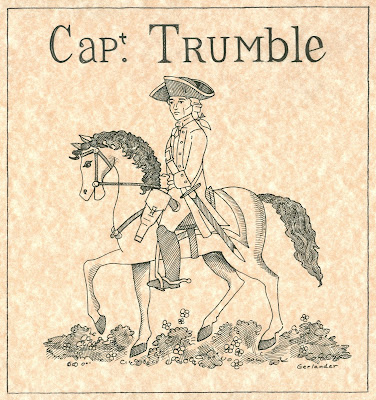 He married Hannah Higley, the daughter of Captain John Higley and Hannah Drake.

"God's best gift to Lebanon was its first settlers. Captain Joseph Trumbull, the first of the name here, and the founder of the Lebanon branch of the family, settled here in 1704, just after the town was organized. He was a farmer and a merchant, and subsequently engaged, with his sons, in foreign commerce, building vessels of their own on the Thames and the Connecticut, and exchanging their exports for imports from the West Indies, England, and Holland. He had eight children, four sons and four daughters, of whom his oldest son, Joseph, his partner in business and supercargo of one of their ships, was lost at sea, and David, the youngest, was drowned in the millpond at home on his college vacation. Jonathan, the "War Governor," had just graduated from college and finished his preparation for the ministry, and was to have been settled in Colchester, when his brother was lost at sea, and he felt constrained to abandon the ministry and go to the assistance of his father. Here he acquired that business knowledge and ability which proved so valuable when he came to administer the affairs of the State and succor Washington and his army in their extremity. No wonder General Washington looked to him with hope when he could find help nowhere else, saying, "Let us see what Brother Jonathan can do for us"; and little wonder that he found it when the State responded with such contributions and sacrifices to the appeals of their heroic Governor."[2]

1. History of New London County, Connecticut, with Biographical Sketches of many of its Pioneers and Prominent Men, Compiled by D. Hamilton Hurd, J. W. Lewis & Co., Philadelphia, 1882, page 491.
2. The Lebanon War Office. The History of the Building, and Report of the Celebration at Lebanon, Conn., Flag Day, June 15, 1891., Edited by Jonathan Trumbull, Published by the Connecticut Society of Sons of the American Revolution, Press of the Case, Lockwood & Brainard Company, Hartford, Conn., 1891, page 75.

Posted by The Lost Trumbull at 6:46 AM No comments: 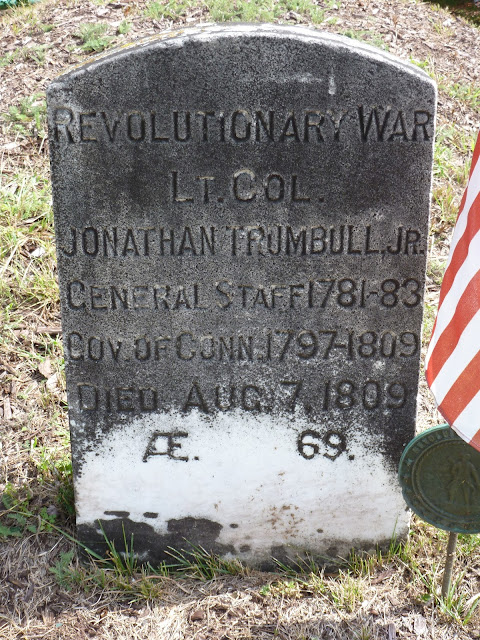 
My ancestral first cousin, Jonathan Trumbull, Jr., ". . . was born March twenty-sixth, 1740, and was baptized Jonathan, after his father. Like his elder brother, he too was destined to a remarkable career -- like him to enter with zeal into the cause of his country when the War for Independence began, but in different departments of duty -- soon to become in this war Paymaster-General for the Northern Department of the American Army -- then Private Secretary to the Commander-in-chief of all the American Armies -- next, surviving the war, to become a member of the first House of Representatives of the United States -- then Speaker of this House -- next a Senator of the United States -- and last, succeeding his father, after a few years, as Governor of his native State, to expire, at a good old age, with the mantle of gubernatorial power still wrapped around him."[1]

Posted by The Lost Trumbull at 5:59 AM No comments: 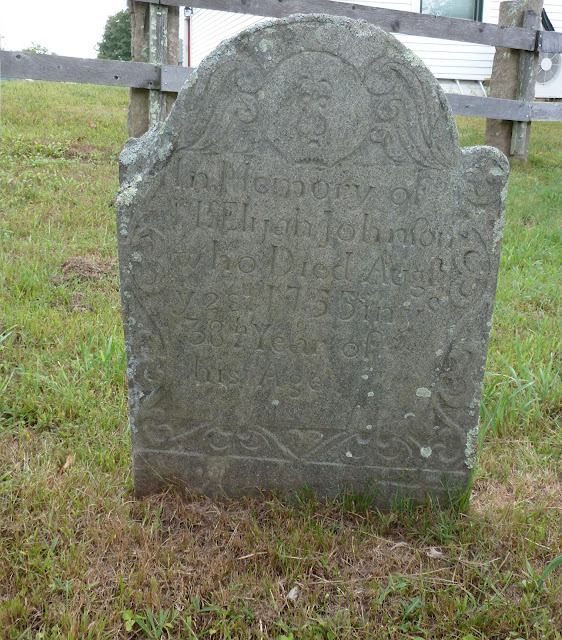 Posted by The Lost Trumbull at 11:49 AM No comments: 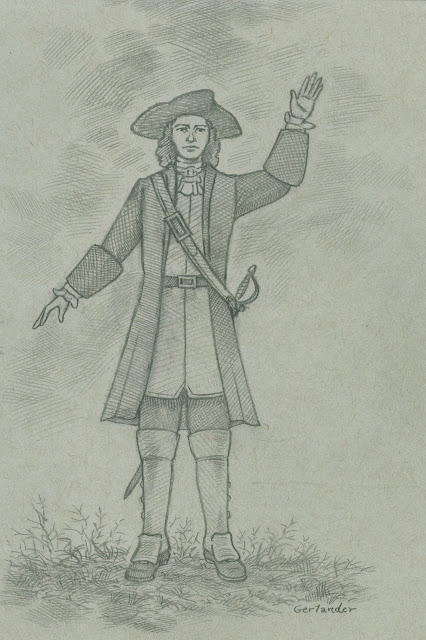 Pencil Sketch of Joseph Trumble, Jr. (my ancestral grandfather), age 26, son of Captain Joseph Trumble, Sr., and his wife Hannah Higley. He set sail from the Port of New London aboard the Trumbull family merchant vessel, the brigantine "Lebanon", bound for the West Indies, December 29, 1731. It was reported five days later by a Captain Boulder, who witnessed the "Lebanon" in "great distress in a storm." Neither the ship or crew were ever seen or heard of again, and were considered "lost at sea".

" . . . on a foreign voyage in the interest of his father's growing business, he was lost at sea, leaving a widow with two daughters. Doubtless he had become, at this time, his father's right-hand man, and doubtless too, much of the father's success and prosperity were due to this son."[1]

". . , but no tidings of that brother, ship, or cargo reached the family evermore. For a time there was a forlorn hope that the ship might have been captured by the Algerine pirates who then infested the seas and held for ransom, but even this hope soon withered and died. The stricken father, doubly bereaved by the loss of his first-born son and of his property by a single blow, appealed to his next son, Jonathan, to come to his aid and rescue."[2]

Joseph Trumble, Jr., was commissioned Quartermaster of the Windham County Troop of Horse in October 1730. He was the eldest son and business partner of Captain Joseph Trumble, Sr., Patriarch of the Trumbull family of Lebanon, Connecticut. He was also the older brother of Connecticut's Revolutionary War Patriot Governor, Jonathan Trumbull, Sr.

He left behind his wife, Sarah Bulkeley, the daughter of the Reverend John Bulkeley, First Minister at Colchester, Connecticut, and two young daughters, Sarah and Catherine Trumble.

Posted by The Lost Trumbull at 6:54 AM No comments:

The House Site of the Reverend Peter Bulkeley of Concord, Massachusetts. 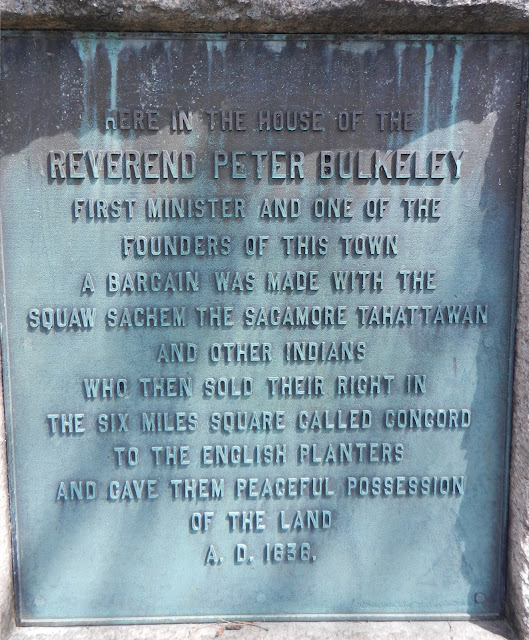 Posted by The Lost Trumbull at 2:36 PM No comments: 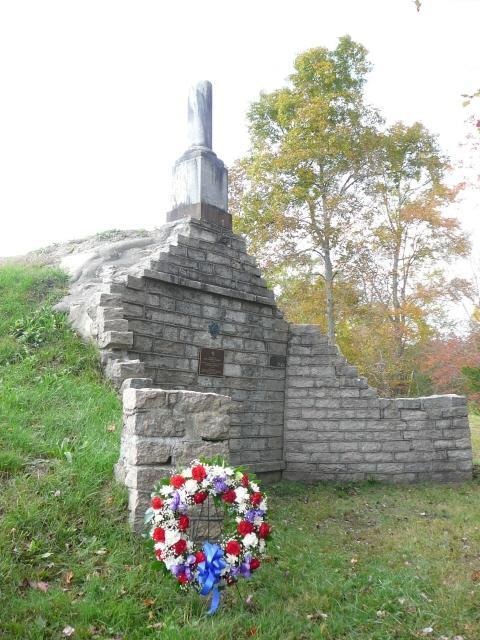 
"Sacred to the memory of Jonathan Trumbull, Esq.
who, unaided by birth or powerful connections,
but blessed with a noble and virtuous mind,
arrived to the highest station in government.
His patriotism and firmness during 50 years of employment in public life,
and particularly in the very important part he acted in the American Revolution,
as Governor of Connecticut, the faithful page of History will record.
Full of years and honors, rich in benevolence,
and firm in the faith and hopes of Christianity,
he died Aug. 9th, 1785, Aetatis 75."[1]

"Among all the Governors of the thirteen states, his excellency Governor Trumbull alone was found a firm patriot, determined to abide by the liberties of his country, whatever might be the event. And he failed not to carry into execution, what he had so deliberately and heartily resolved. During the whole controversy, amidst the darkest scenes, he remained steadfast in the glorious cause, invariably pursuing the grand end in view, and trusting in GOD Almighty, to carry it into effect.

Thus like Moses he was wise and faithful; and like him, I may also add, he was indefatigable and laborious. He spared not himself that he might serve his country. Laying aside all private business, divesting himself of all secular concerns, but what pertained to his office and the public, besides attending on stated and public assemblies, he sat ONE THOUSAND DAYS IN COUNSEL!"[2]


Upon hearing of the Governor's death in 1785, George Washington wrote:

"A long and well spent life in the service of his country, justly entitled him to the first place among patriots."[3]


"The Trumbull tomb at Lebanon was erected in 1785, soon after the death of the great "war Governor," by his three then surviving sons, Jonathan, David, and John. Within this family mausoleum rest the sacred ashes of more of the illustrious dead than in any other in the State, or perhaps the country."[4]

Posted by The Lost Trumbull at 6:58 AM No comments: 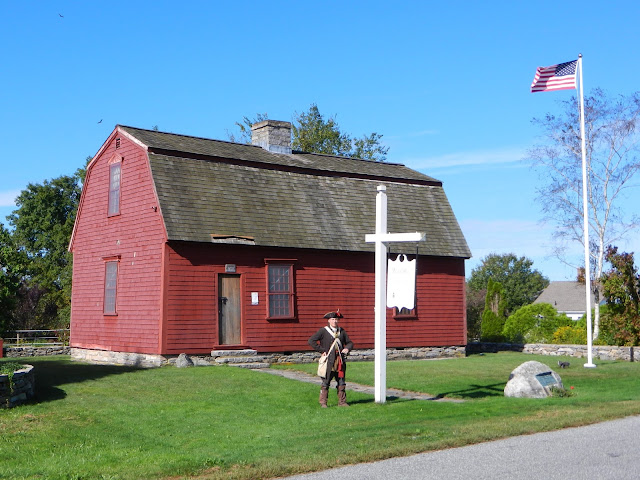 Lebanon, Connecticut
Owned and maintained by the Connecticut Society of the Sons of the American Revolution, Inc.

The War Office, according to tradition was built circa 1727 by Gov. Trumbull's father, Captain Joseph Trumble, Sr., the Patriarch of the Trumble/Trumbull family of Lebanon, Connecticut. The Trumbulls were merchants, and the War Office originally served as the Trumbull family store. The War Office is where Governor Jonathan Trumbull, Sr. met with the Connecticut Council of Safety during the American Revolution (1775-1783). In this building Washington, Putnam, Knox, Parsons, Huntington, Spencer, Lafayette, Rochambeau, Chastellux, Lauzun and others met with Connecticut's Patriot Governor. "It has been said that more money, food, munitions, and manpower for the colonial forces were directed from this building during the Revolution than from any other area in the 13 original colonies."[1]

"In Connecticut the Committee of Safety took the form of an advisory council to assist the Governor in military matters. This colony alone of the thirteen was able to pass the crisis of the Revolution without any alteration in government, and the rebel Governor, Jonathan Trumbull, remained throughout the war its executive head."[2]

Posted by The Lost Trumbull at 2:09 PM No comments: 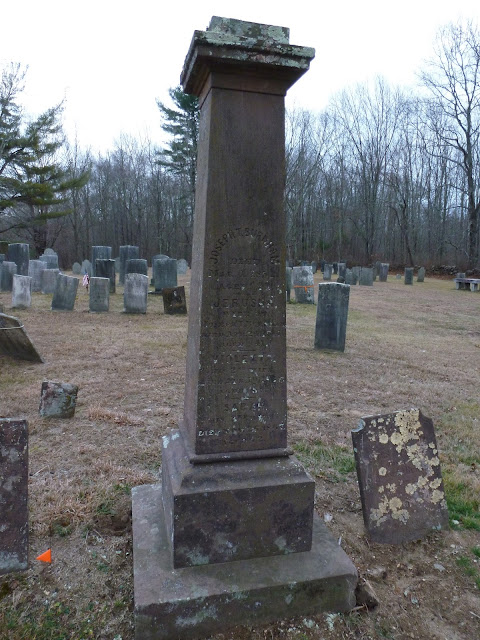 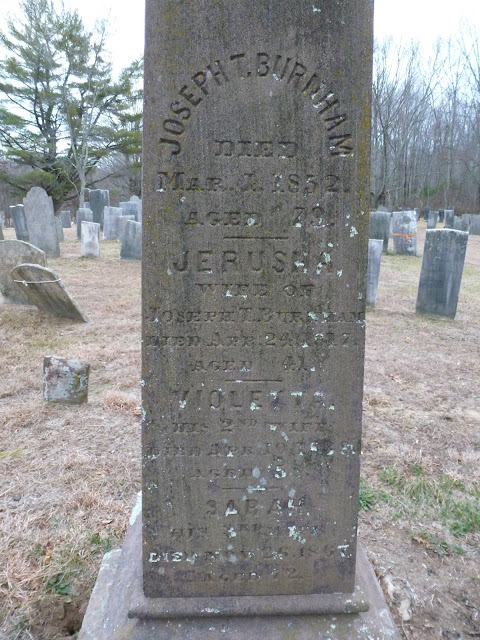 For the descendants of Joseph Trumbull Burnham, see: Family Records [Heretofore unpublished] Collected in Commemoration of the Three Hundredth Anniversary of the Settlement of Connecticut (New Haven, Conn.: The Connecticut Chapter of the National Society Daughters of Founders and Patriots of America, Inc., 1935), 53-55.

Posted by The Lost Trumbull at 7:03 AM No comments: