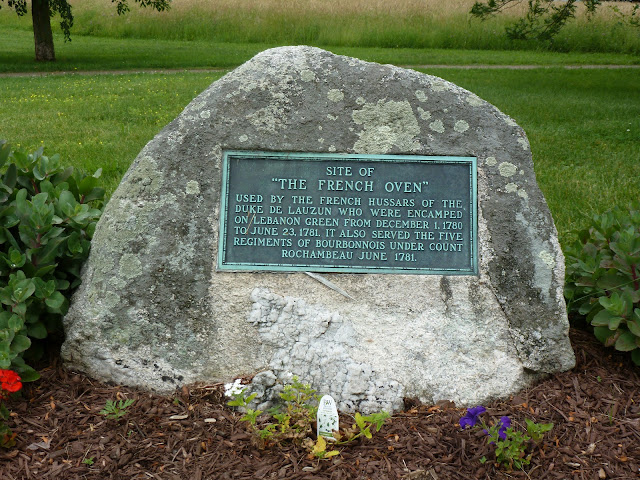 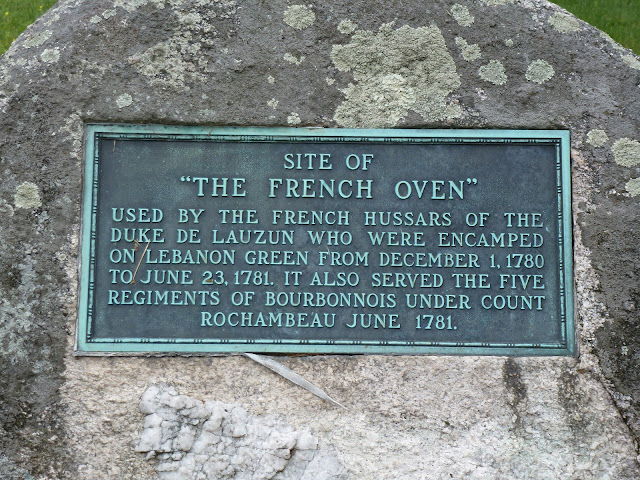 Photos: (Top) Plaque marking the site of "The French Oven" on Lebanon Green where the fictitious characters of Mistress Prudence Strong of Lebanon and French Private Francois Duplan would meet and talk during the French Winter Encampment of 1780-1781. (Bottom) Lebanon Green looking North. 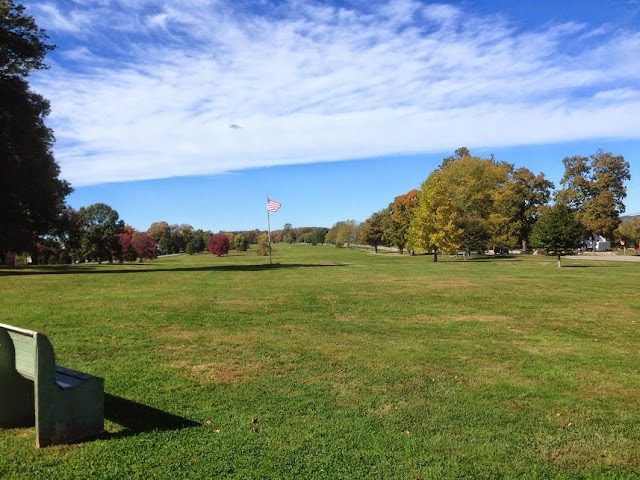 The following story was transcribed from a newspaper published in 1879. Written anonymously and originally published in the New York Sun. The story was picked up and published by numerous newspapers across the country, including The Cambria-Freeman from Ebensburg, Pennsylvania, on September 5, 1879; The Recorder-Tribune from Holton, Kansas, on September 18, 1879; Jasper Weekly Courier from Dubois County, Indiana, on September 19, 1879; The Times-Picayune from New Orleans, Louisiana, on September 21, 1879; Daily Alta California and San Francisco Times from California, on October 26, 1879; etc. It is a story surrounding the French deserter who was executed during the French winter encampment of 1780-1781 in Lebanon, Connecticut.

As a prequel to this story, I included the following four passages which were written within twenty-five years of the stories publication in the New York Sun, all four sources regarded the story as fiction.

“Deserter Shot. -- While Lauzun's legion of hussars were quartered in Lebanon, in the winter of 1781, some depredations by his troop were committed upon the poultry, pigs, and sheep of the inhabitants, one of the latter being taken from the fold of even good old Parson Williams. When these complaints reached the ears of the duke, in view of the fact that the people of the whole town had vied with each other in extending the most cordial hospitalities and furnishing the most abundant supplies to this whole corps, their chivalrous commander was deeply mortified, and resolved on its summary suppression. A few of the suspected hussars, from fear of consequences, deserted from camp and fled into the country. One of the more prominent of these was soon after recaptured and brought into camp about nightfall. A court-martial was immediately ordered, by which the soldier was tried that same evening, convicted of desertion, and sentenced to be shot, and was shot at sun rise the next morning in the presence of the whole corps, who were ordered out to witness the execution. This summary example effectually ended all further depredations.

It is this legend that an ingenious writer of romance has quite recently seized upon as the foundation of a very fairly written sensational story of love and mystery about this deserter and a mythical Prudence Strong, which was published in the New York Sun and extensively copied by other papers.”

“It was always known as the "War Office," and local tradition as well as written history told the story of the building. Whenever the occasional newspaper correspondent visited Lebanon, the building and its history were made the usually unfortunate victims of his pen. The varied and variously at tired accounts of the building and its surroundings which have appeared in the metropolitan journals would form a little literature on the subject rather more amusing, and sometimes more provoking than accurate. Even romance has hovered about the old building in the story of Mistress Prudence Strong, printed some twenty years ago in the New York Sun, and largely copied by other papers of lesser note. The heroine appears to have been a mythical personage unknown to the town records or the families of Lebanon; while the hero, whose name may or may not be correctly given, was a French soldier, who, for some trifling lapse in duty, was sentenced by a court-martial to be shot as a deserter. The romance tells how Mistress Prudence Strong procured his pardon at the War Office from Rochambeau, how the pardon was entrusted to a sentry for delivery, and delivered too late. A French soldier of Lauzun's legion was certainly shot as a deserter at Lebanon; but beyond this fact, the romance of Mistress Prudence Strong appears to be romance, pure and simple.”

-The Lebanon War Office. The History of the building, and Report of the Celebration at Lebanon, Conn., Flag Day, June 15, 1891, Connecticut Society of Sons of the American Revolution, Hartford, 1891, pages 9-10.

“. . . and where a deserter was shot by order of the Duke. A fairly written story, which appeared in the New York Sun and was widely copied, credits this deserter with keeping tryst until so late an hour that his life was the penalty for being out beyond permission, but alas! History states that he stole a pig and fled to the woods because of the duke’s warning to the regiments that no further depredations among the town folk who so generously provided for them should pass unpunished. How gladly would we fancy him a chivalrous lover, forgetting as he looked in his sweetheart’s eyes that time waited for no man, but “the pretty Prudence” melts into a fictitious heroine by comparison with cold facts, and the French deserter becomes as ignoble a person as “Tom, the piper’s son,” whom we learned to despise so long ago as we pored over the ballads of Mother Goose.”

“There is another mound called the deserter’s grave, but it is on the village green. An insignificant pile of stones mark the resting place of one of those French hussars who deserted their camp, fearing detection because of their depredations upon the neighboring sheepfolds and poultry yards. Arrested and convicted, this one was shot the following day at sunrise. Feminine pity for the unfortunate man has taken the form of touching romance, according to which this private was a titled French nobleman and absent from camp only because he would tell his love to a pretty Yankee maiden beyond the town limits. His false accusation of desertion may have been the trumped-up charge of a rival. So said the story in the New York Sun, of twenty or more years ago. Alas, for such a delightful explanation, which lacks historic basis!” 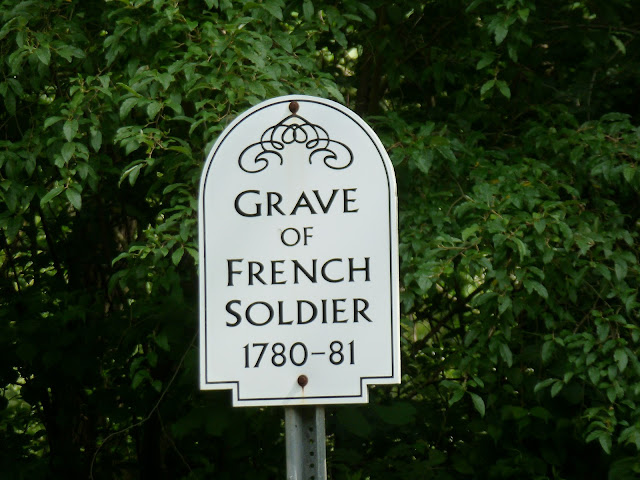 "Trumbull's War Office.
And the Secret That Mistress Prudence Strong
Hid There Years Ago.

From the New York Sun.

The old War Office in Lebanon, Ct., of Gov. Trumbull — Washington's Brother Jonathan — has lately received a new roof. This means that the little building which sheltered Washington, Rochambeau and Lafayette, which was the meeting-place of the Council of Safety, and the halting place of the messengers who bore important despatches between Philadelphia and Boston, is not yet to be torn down. It also means that the mysterious document which Prudence Strong once hid there, in defiance of Gov. Trumbull and Count de Rochambeau, will still longer remain in its hiding-place -- for years ago, even before Gov. Trumbull was gathered to his fathers, the villagers said that the papers would never be found until the building was taken down, and every rafter and every crevice between the stones of the large chimney were examined.

Before I tell the tradition that has been handed down, and of which still the older towns-people say, with the manner of persons who know, that there is a great secret hidden in the walls of the War Office -- a secret that has been buried there a hundred years -- a word or two ought to be written about the War Office itself. It was sadly slighted during the Centennial year, yet there is probably no building standing, save only Independence Hall, that sheltered at one time or another so many of the heroes of the Revolution as did this little gable-roofed structure on Lebanon Green. This is not a matter of tradition, but is fully authenticated by papers and letters which were collected by the late Judge Larned Hebard. Here were written the letters and hence came the suggestions to the Commander-in-chief from Gov. Trumbull which were so practical and bubbling over with good sense as to cause Washington always to speak of the Governor as Brother Jonathan, a name that in time became generic, and even now is applied to the "Universal Yankee Nation." Here always, when not called away, was the Governor to be found. Rochambeau made it his nominal headquarters when in Winter quarters in Lebanon with his battalion. Gov. Trumbull's War Office was as well known by common repute to every Revolutionary soldier as was Independence Hall. It stands to-day just as it then did, and barring the new roof, looks as it did then, and the surroundings are almost identical — an advantage that it has over Independence Hall. The Hon. Samuel J. Tilden, while visiting Lebanon a few years ago, evinced the greatest interest in the building. He said to Judge Hebard that it was a relic of the Revolution that ought to be preserved, and suggested that it be made the depository of mementoes of that war.

From the papers and letters that Judge Hebard collected, many of them coming into his hands when settling an estate of the husband of one of Gov. Trumbull's daughters, from the information that Judge Hebard gained from members of the Trumbull family whom he knew, and from various other sources, the story of the secret of Prudence Strong -- a secret which it is firmly believed would have been exposed had the office been torn down -- is gathered. The Count de Rochambeau, with his battalion of allies, in the Winter of 1780 rested in Lebanon. The soldiers pitched their tents and built their huts on the slope of a hill, at the bottom of which ran a stream of water to the mill pond. Stream and pond and sloping hillside have not been changed since then by either nature or art.


It is said that Count de Rochambeau subsequently learned who Francois Duplan was, and that he was of gentle blood."

Posted by The Lost Trumbull at 7:39 AM