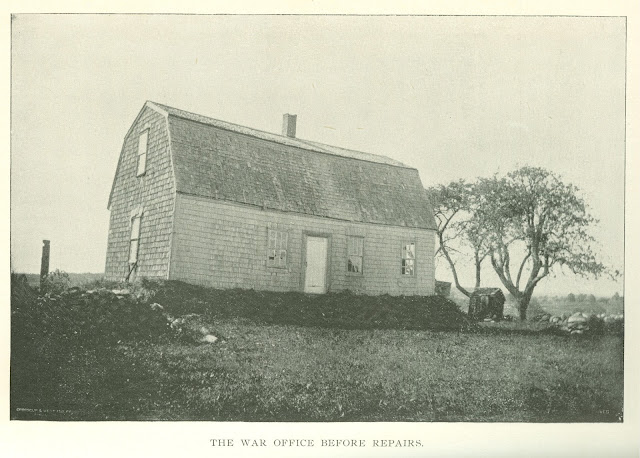 How the War Office looked when it was owned by Mrs. Bethia Wattles in the nineteenth century.[1] 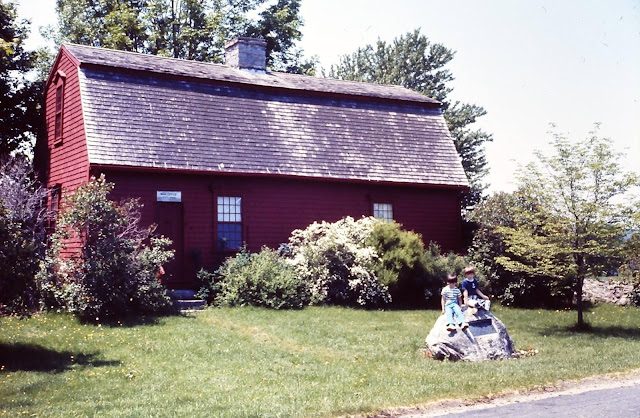 My first visit to the War Office, many years ago, with my father and brother.

Over the past few years, I have done extensive research on the written history of the War Office, and am quite familiar with its history, and how the Connecticut Society of the Sons of the American Revolution obtained ownership of the War Office from Mrs. Bethia Wattles in the late 19th century. But until recently, I never gave much thought about who Mrs. Bethia Wattles was? What was her story? This study is a little history and remembrance of the woman who saved the War Office, ensuring that the building would be preserved for future generations.

Children of John and Bethia Wattles born at Lebanon, Connecticut.


Mrs. Bethia Wattles was a descendant of Revolutionary War Patriots:

On her father's side, she was the granddaughter of Colonel Jeremiah Mason of Lebanon, Connecticut. "He owned a large estate, and equipped at his own expense, and commanded a company of Minute Men which did duty at the siege of Boston. His command was with the detachment sent out in the early part of the night to fortify Dorchester Heights. In the autumn of 1776 he was promoted to the rank of colonel, and at the head of a regiment joined the army in the vicinity of New York City. He continued in command of his regiment until the close of the war. When General Arnold made the assault upon and burnt New London, he handled his regiment with such skill and address as to receive special mention. After the British withdrew, Colonel Mason was placed in command of Fort Trumbull, at the mouth of the harbour, for some months, until the excitement had passed away."[12] 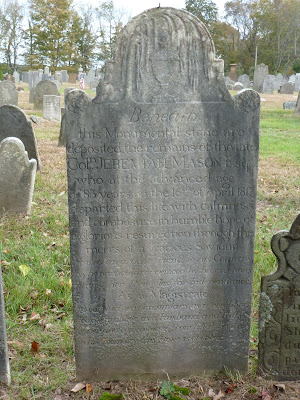 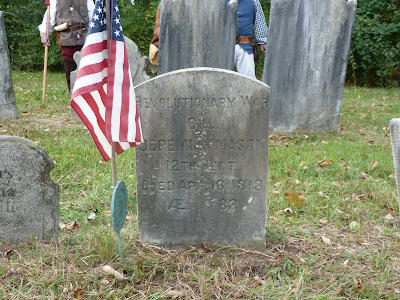 On her mother's side, she was the granddaughter of Captain William Huntington of Lebanon, Connecticut. "He was of the same family as Gen. Jedediah Huntington, and Gov. Samuel Huntington, signer of the Declaration of Independence and President of Congress."[13] "He enlisted May 10, 1775, in the Third (General Putnam's) Regiment, which was raised on the first call for troops by the special session of the Legislature of May, 1775, and was recruited mainly in Windham County. They marched in May by Companies to Camps around Boston, and were stationed during the siege in Putnam's center division at Cambridge till the end of their term of enlistment, December 10, 1775. A detachment was engaged at Bunker Hill."[14] William Huntington served as a Corporal in Captain John Durkee's Company[15] of Gen. Israel Putnam's Third Regiment mentioned above. In November 1776, he was commissioned Captain of the First Company of the 12th Regiment of Connecticut Militia: "This Assembly do establish William Huntington to be Captain of the first company or trainband in the 12th regiment in this State."[16] 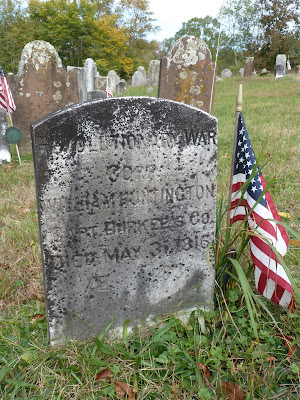 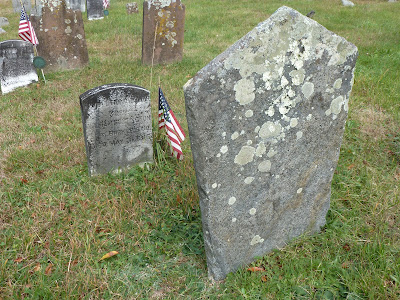 Her aunt (her mother's sister), Wealthy Huntington, was married to the portrait painter, Simon Fitch. As boys, he and John Trumbull (The Artist) went to the Tisdale School in Lebanon, Connecticut.[17] He served in the Revolutionary War, "Detachments from Militia Horse, 1779. ["A return of men detached from the 2nd Regt. of Light Horse in the State of Conn., to serve in the Continental Army until the 15th of Jan'ry next, agreeable to Orders from Lieutenant-Col. Seymour, Commandant."]"[18] Simon Fitch is listed in "Capt. Dan. Throop's Company, Lebanon."[19] 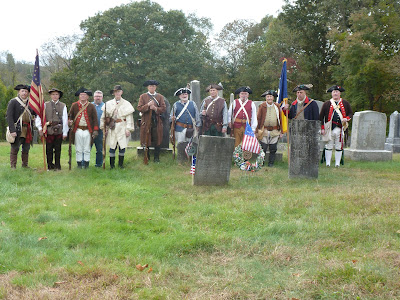 Some interesting notes about her life, just to put into perspective the time in which she lived:

* She was born March 8, 1800. Less than three months after General George Washington died on December 14, 1799. She lived all her life in Lebanon, Connecticut. As a child, and as a young woman, she would have seen and talked with veterans of the American Revolution. She probably heard many stories of the Revolutionary War throughout her life, from both family, and residents of the town. Possibly stories of Revolutionary War Governor Jonathan Trumbull Sr., the French Winter Encampment of 1780/1781, and General George Washington's visit and review of the French troops on March 5, 1781, just to name a few.

* She was nine years old when Connecticut Governor Jonathan Trumbull, Jr. (1740-1809), son of Revolutionary War Governor Jonathan Trumbull Sr., died on August 7, 1809. Governor Jonathan Trumbull, Jr., served as, "Paymaster-General for the Northern Department of the American Army -- then Private Secretary to the Commander-in-chief of all the American Armies -- next, surviving the war, to become a member of the first House of Representatives of the United States -- then Speaker of this House -- next a Senator of the United States -- and last, succeeding his father, after a few years, as Governor of his native State, to expire, at a good old age, with the mantle of gubernatorial power still wrapped around him."[20]

* She was eleven years old when William Williams, Signer of the Declaration of Independence died on August 2, 1811, and she was thirty years old when his wife, Mary (Trumbull) Williams, daughter of Revolutionary War Governor Jonathan Trumbull, Sr., died on February 9, 1831.

* She was twenty-two years old when David Trumbull (1751-1822), son of Revolutionary War Governor Jonathan Trumbull, Sr., died on January 17, 1822. David Trumbull, "his father's right-hand man,"[21] and, "under his brother Joseph, a Commissary for the armies of the Revolution -- and, under the Connecticut Council of Safety, to be a most active agent in procuring and preparing arms and munitions of war for service against the foe."[22] It was David Trumbull who had Redwood built in 1778/1779, the house was used as a headquarters by the Duc de Lauzun during the 1780/1781 Winter encampment of French troops.

* She was twenty-four years old when she married John Wattles on March 11, 1824 in Lebanon, Connecticut. 1824, the same year the Governor Jonathan Trumbull House and the War Office (1st move) were moved from their original locations.


"War Office - Council of Safety. - The house of Governor Trumbull stood originally and until 1824 on the north corner of and the Colchester road, on the present site of the Lyman house, and the War Office was west and near it, on the road. In the winter of 1823-24, Solomon Gilbert, who in 1821 had bought the premises of John Champion, removed both the house and office a few rods farther north, to the place where they are shown in the accompanying view, and added the portico to the front of the office. The view is taken from a very accurate sketch by Barber in 1836. The Governor's house still remains there in good preservation, but the War Office was again removed, in 1844, a few rods farther north, where it now stands. In this office Governor Trumbull conducted his great commercial business, and through the war of the Revolution the Council of Safety, or War Council of the colony, held most of its sessions here, and it became by force of circumstances not only the military but also the naval headquarters of all the land and marine forces of the colony during that war."[23]

* She was twenty-five years old when Lafayette laid the cornerstone for the Bunker Hill Monument in Charlestown, Massachusetts, on June 17, 1825, the fiftieth anniversary of the battle. Colonel James Clark (1730-1826) of Lebanon fought at the Battle of Bunker Hill, and was present at the laying of the monument cornerstone, he was ninety-five years old.[24]

* She would see the War Office used as a country store and post office. 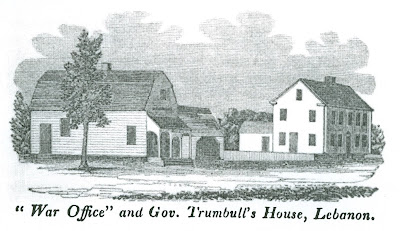 Earliest illustration of the War Office, published by Barber in 1836.[25] This illustration shows the Gov. Trumbull House and War Office after they were moved in 1824. The War Office would be moved again in 1844 to its present location. As of today, no illustration exists depicting the War Office in its original location during the American Revolution. It's a shame there are no sketches from Col. John Trumbull.

* She would have seen the War Office (2nd move) again moved to its present location in 1844.


* In 1876, she would observe the Centennial of the United States of America.


Originally Mrs. Bethia Wattles offered the building to the Town of Lebanon in 1889.[29] "The citizens of ancient, historic Lebanon are to call a town meeting at an early date to determine whether the town will accept as a gift from Mrs. Bethia Wattles the famous old "war office" of Gov. Jonathan Trumbull, the "Brother Jonathan" of the Revolution. The offer is made on condition that the building shall be preserved and kept in good repair at the expense of the town."[30] "but the people voted in town meeting that they didn't want to incur the expense of taking care of it."[31] It was through the efforts of members of the Connecticut SAR, that the War Office was, "formally deeded to the Connecticut Society of the Sons of the American Revolution."[32] "I call your attention most particularly to the Lebanon War Office, believing, as I do, that the restoration of this building, and that our custody and care of it in the future is the most important work which our Society has in hand. By deed of gift from Mrs. Wattles of Lebanon, procured by Mr. Frank Farnsworth Starr, under appointment by our Board of Managers, we now own this building and the lot on which it stands."[33]

Jonathan Trumbull, President of the Connecticut Society of the Sons of the American Revolution, stated, "I was much interested in investigating the old war office, and am happy to say I believe it can be restored and repaired in a way that will insure its existence through the next century at least. The honest old oak framework shows no decay, and the traces of the original details are such that, with the aid of old traditions and recollections, we can make it very nearly the old war office of Revolutionary days."[34] The Connecticut SAR would state that, "Traces of the original partitions, windows, and doors were also found to be so plainly marked that the restoration could really be made complete."[35]

Mrs. Bethia Wattles was a living witness to the history of the War Office throughout the 19th century!

She was there, having actually seen the War Office in all its locations over the years. As previously stated, through written tradition (Barber's illustrations, Stuart's description of the War Office, etc.), the recollections of Mrs. Bethia Wattles and others, and the traces of the original details seen by the Connecticut SAR, the War Office, "finally in 1891, was restored to its original semblance and re-dedicated to patriotic purposes."[36]

* She also took an active part in the War Office Dedication Ceremonies, June 15, 1891, "The first name upon the register was that of the donor of the building, Mrs. Bethia H. Wattles, aged ninety-one."[37]

"Three years ago, "The Sons of the Revolution" came into possession of this historic building. It was put in repair, and was dedicated with patriotic ceremonies. The building was presented by Mrs. Bettina Wattles, then ninety-one years old, who has since died. In it are placed a few ancient relics, and is visited by those who come to this ancient town."[38]

In 1901, Jonathan Trumbull stated, "And we can point to the old war office at Lebanon as property of which our society is the proud owner, saved from destruction and restored to its original condition in filial reverence for the men who toiled for liberty and promptly and ungrudgingly answered the calls of Washington within its walls."[39]

* Mrs. Bethia Wattles died in 1892, and is buried next to her husband and two daughters in the Center Cemetery, Lebanon, Connecticut.[40] 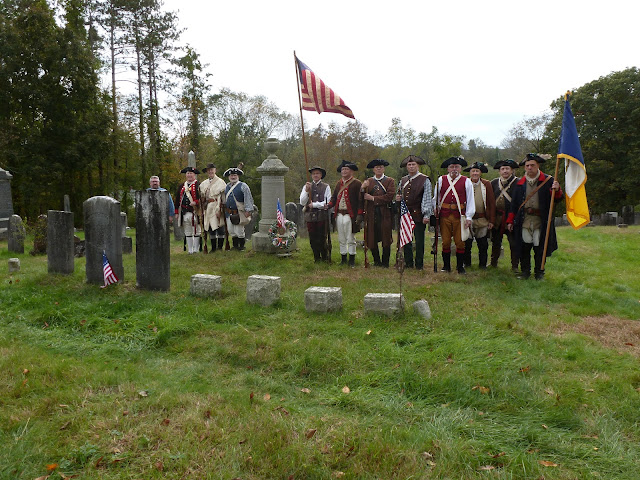 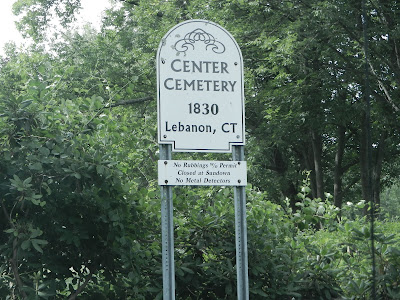 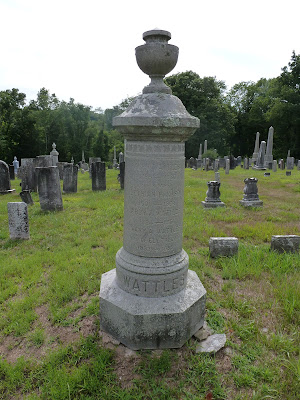 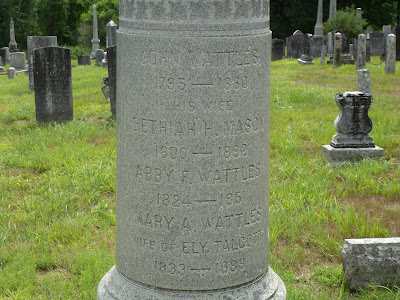 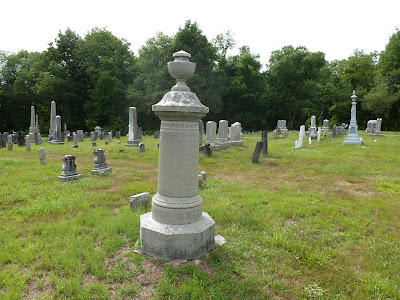 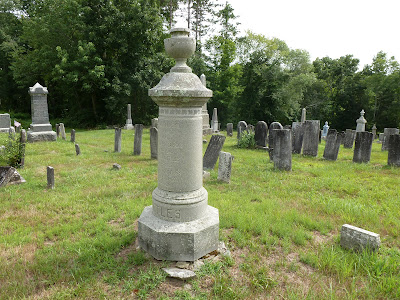 Posted by The Lost Trumbull at 2:20 PM