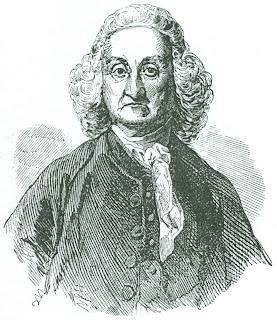 Governor Jonathan Trumbull Branch #13
The Connecticut Society of the Sons of the American Revolution
In Commemoration of the 310th Birthday of Gov. Jonathan Trumbull (1710-1785)
War Office, Lebanon, Connecticut – October 10, 2020
We gather here today to commemorate and remember the 310th Birthday of Governor Jonathan Trumbull, Sr., Revolutionary War Governor of Connecticut, Commander-in-Chief of the Connecticut Militia and Connecticut Naval Forces. A Patriot who bore the honored title of, "Rebel Governor" in England, a term the British called Governor Jonathan Trumbull. He was the rebel governor whose proclamation dated March 22, 1775, providentially picked April 19, 1775, the day they, "fired the shot heard round the world," the start of the American Revolution, as a, "Day of publick Fasting and Prayer, throughout this Colony, by all Christian Churches and Societies in it; . ."[1] He was the rebel governor who penned Connecticut's own "Declaration of Independence", June 18, 1776, and he was the rebel governor, a friend and supporter of the rebel general George Washington. A “Rebel Governor” whom the British would have hanged, as they would any signer of our nation's Declaration of Independence.
Gov. Trumbull, a Patriot that, “When the news of Lexington reached Connecticut, the Governor hastily converted his Lebanon store into a supply depot, and for days worked feverishly, coatless and hatless, his gray locks loose in the breeze, giving tents and rations to the train-bands that came through, and packing wagons with munitions, provisions, and clothing for the camps about Boston. This little shop throughout the war was one of the government centers of Connecticut. Hundreds of meetings of the Governor and Council were held there, and within its walls at various times stood Washington, John Adams, Hancock, Jefferson, Greene, and Rochambeau.”[2] states Nevins in his 1924 book, "The American States during and after the Revolution 1775-1789.”
Barber's "Connecticut Historical Collections" published in 1836 states, “Gov. Trumbull was employed in many civil offices all of which he executed with great fidelity, and grew in the esteem of the people as he advanced in years. He was an active man in public life, 51 years; 15 of which he was Governor of Connecticut colony. When he first went into this office it required a man of Prudence, firmness, consistency and ability to manage affairs. A good pilot is necessary for every bark which sails upon a tempestuous sea. In Connecticut the appearance was more tranquil than the neighboring province, but the clouds were gathering which soon darkened the face of the country. Gov. Trumbull saw the storm burst upon Massachusetts in 1775; he lived to see the auspicious day, also, when his country enjoyed the blessings of peace, and the glory of her independence. No man could guide the vessel of state with more care. No man ever loved his country more. During the whole American war, he showed himself the honest and unshaken patriot, the wise and able magistrate.”[3]
The citizens of the State of Connecticut thought so highly of Trumbull, that when the State dedicated two statues in the United States Capitol, Governor Jonathan Trumbull and Roger Sherman were chosen. The Honorable Stephen W. Kellogg of Connecticut in his 1872 speech in the House of Representatives quotes Trumbull’s biographer Isaac Stuart, who states, “If strong intellect and extensive knowledge, fixed industry, the conception of great ends, and perseverance and success in their execution; if an exalted sense of honor, incorruptible integrity, energy of purpose, consummate prudence, impregnable fortitude, a broad, generous, and quenchless patriotism, charities ever active, wise and fervent – if all these qualities, in union with a most amiable temper and the gentlest manners, and in affiliation, too, with all the noble graces of the Christian faith; if these constitute a great and a good man, that man was Trumbull.”[4]
Jonathan Trumbull, Past-President of the Connecticut SAR, a Great Great Grandson of Gov. Trumbull stated in an address delivered in 1897, “To no single individual, who lived within our borders, is the cause of American Independence so largely indebted for its success as to Jonathan Trumbull. The honors which he has received from the historians and from Connecticut have not been extravagant. His statue, with Roger Sherman’s, properly represents our State in the rotunda of the National Capitol, and a reproduction of these two statues adorns the face of our State Capitol. The Sons of the American Revolution have honored themselves in restoring his old war office.”[5]
George Washington, upon hearing of the Governor's death in 1785 stated, "A long and well spent life in the service of his country, justly entitled him to the first place among patriots."[6]
Gov. Jonathan Trumbull, we, the inheritors of the Liberty that was secured during the American Revolution, reaffirm your fervor for the Patriot cause. We, the members of the Gov. Jonathan Trumbull Branch #13 of the Connecticut Society of the Sons of the American Revolution, descendants of the Patriots who fought for, and secured our Nation's Independence, remember your service and sacrifice. We are thankful for your service, and for our birthright as citizens of the greatest nation on earth, the United States of America.
We come together today in the shadow of your WAR OFFICE, as Barber stated in his book, “Among First Patriots,” “that little building had to yield precedence only to Faneuil and Independence Halls as a cradle of American Liberty.”[7]
Governor Jonathan Trumbull, we remember and commemorate your 310th Birthday.