from The Lost Trumbull Blog 2021 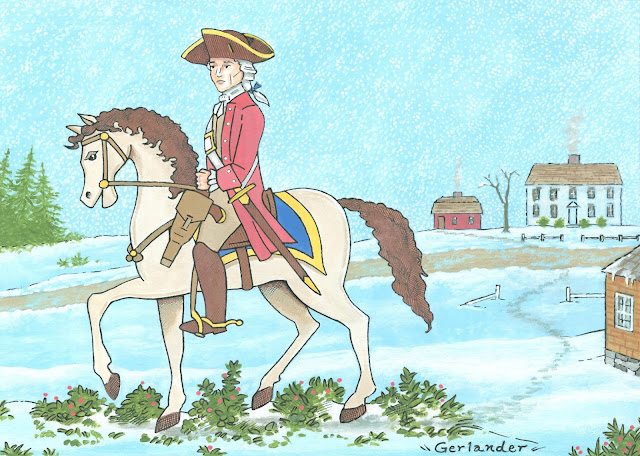 Painted by Todd Gerlander, December 2020, Pen & Ink and Acrylic Paint on Illustration Board
The Illustration depicts Captain Joseph Trumble, Sr. (1678-1755), Patriarch of the Trumble/Trumbull family of Lebanon, Connecticut, Christmas, 1737. He is shown wearing a fine suit of clothes with military accoutrements. In 1718 he was commissioned a Lieutenant in the New London County Troop of Horse, and in 1728 he was commissioned a Captain in the Windham County Troop of Horse. This was before Connecticut organized all its local town militia companies into numerical regiments in 1739. The painting shows how the Trumbull properties might have looked prior to both of their moves in 1824, and the War Office again in 1844. Modern illustrations that I have seen of these buildings, specifically those depicting Revolutionary War era scenes, show these buildings in their current locations on West Town Street. Some of these illustrations are also based on John Warner Barber's 19th century, circa 1835 sketches. Both of these buildings were originally located on, and faced the Colchester Road (Route 207), on the north corner of the Colchester Road and West Town Street.
The back corner of the house in the right forefront of the painting is the old Trumbull family homestead, which Captain Joseph Trumble purchased from Rev. Joseph Parsons, first minister of Lebanon. No image of this house exists. This house would later be replaced when David Trumbull (a son of Gov. Jonathan Trumbull) had Redwood built in 1778/1779. Redwood was used by the Duc de Lauzun as his headquarters during the French winter encampment of 1780-1781. The old Colchester Road, present day Route 207, can be seen in the distance. Captain Trumble's recently built (1735/1740) new house and his adjacent store (traditionally built circa 1727) can both be seen facing the Colchester Road. If a rumored tunnel (which this blog has discussed previously) between these two buildings ever existed, it would be located there, not where the buildings are located today. Captain Joseph Trumble's second son, Gov. Jonathan Trumbull (1710-1785) would inherit this house in 1755 (his youngest son John, "The Artist of the American Revolution," was born there in 1756.). In 1775 the Trumbull store would be used as The War Office, and the Connecticut Council of Safety would meet there during the American Revolution 1775-1783. To the left of the War Office was the Barrack Lot. French soldiers encamped there during the winter of 1780-1781.

Posted by The Lost Trumbull at 9:00 PM